Why we want everyone to learn CPR

Brothers, Age 7 and 10, Perform CPR to Save Grandmother in Cardiac Arrest

Grayson, left, and Kian Chatterson Wu are being credited with saving their grandmother's life. (CBC)

It was a Saturday night and seven-year-old Grayson Wu said that he knew something was wrong with his grandma when he asked for a snack and she didn't answer.

"Unconscious, on the couch," interjects 10-year-old Kian Wu, rolling his head back and opening his mouth wide to illustrate.

"She looked really dead," adds Grayson. "Spit was going back into her mouth. She was grunting a little."

He makes a gurgling sound.

It was Nov. 10 and the brothers were having a sleepover at their grandma's house in Saskatoon. They'd just watched a movie when 62-year-old Patti Chatterson had a massive heart attack and went into full cardiac arrest.

"It was so scary. I didn't want to let our grandma die," said Grayson.

'There was no air coming out': Brothers recall calling 911 and saving grandmother's life

Back in June, Kian had a sleepover party to celebrate his tenth birthday. The boys were all playing downstairs.

Lee Chatterson Wu is a nurse and taught her sons basic CPR. (CBC)"There was a little boy there whose parents are medical professionals and they've taught their kids things like this. The kids were all downstairs watching a movie and I heard this little boy yell out, 'It's cardiac arrest, start CPR.' So I made a big deal about it, I said you're very smart and good job," she said. "And my boys asked me to teach them."

Chatterson Wu is a nurse and said she ran the boys through the basics.

"I honestly didn't think they'd ever need it, or that it was necessarily an important thing to teach them at the ages of 7 and 10."

Kian and Grayson say they first tried calling their mother and father, but they didn't pick up. So Grayson said they had to call 911.

"We gave them our address, and then we told them that our grandma was unconscious and not waking up and not breathing and had no pulse. And then we checked her nose, and she wasn't breathing," said Kian.

"There was no air coming out," adds Grayson.

The 911 operator walked the boys through the steps on the phone. They got their grandma off the couch and onto the floor.

Kian continued with compressions, hard enough to crack her ribs, while Grayson plugged her nose and gave her breaths.

'No recollection of that day'

Patti Chatterson said she knows that she's lucky to be alive.

"Cardiac arrest is a complete heart stop. Everything shuts right down, there's nothing working," she said.

"Not too many people recover from cardiac arrest. They just don't if they're not witnessed."

Patti Chatterson says she would be dead if her grandsons hadn't performed CPR. (CBC) Chatterson said she has no recollection of that day. Her first clear memory is waking up four days later in the cardiac care unit at Royal University Hospital, under the care of her co-workers.

It's through their stories that she pieced together what happened.

"From the time I actually arrested until probably I got loaded into the ambulance, I'm thinking it was a good 10, 12 minutes or so. They had to re-start my heart five times in the house because it kept stopping and starting," she said.

"A terrible experience, one that I would never want to repeat."

Aside from cracked ribs and the memory loss, she's made a complete recovery. Her medical background gives her a full appreciation of her luck.

"With cardiac arrest, there's usually just three outcomes: death; you can survive it and be completely brain dead; or my recovery," she said.

Lee Chatterson Wu said that she now recommends that parents teach their kids the life-saving technique.

"I hadn't shown them thinking they would ever need it," she said.

"But obviously, in this situation, it was important, it saved my mom's life. They've done an amazing thing with it, so I would definitely be a big advocate of that."

Stick Em Up, I'm taking you in, as soon as I finish this donut!

Be prepared, get trained. Heart Attacks don't care if there is a pandemic. 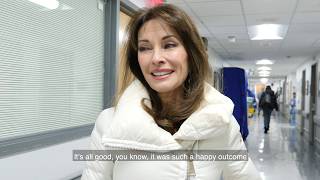 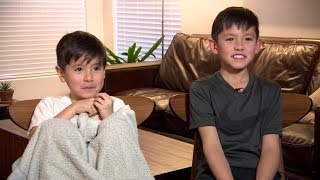 Why we want everyone to learn CPR 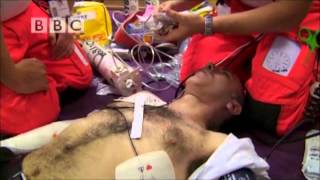 BBC on hand while EMT employee goes into cardiac arrest

Is Your School Prepared?

Autumn is a time of renewal

Can you locate an AED?

Stick Em Up, I'm taking you in, as soon as I finish this donut!

The Importance of stepping up; hands only CPR works